In the Footsteps of Florence Nightingale

Memoirs of a military nurse 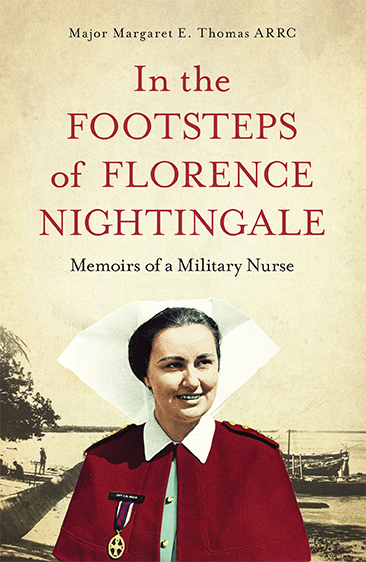 ‘Remember when you are far away up country, possibly the only Englishwoman there, that these men will note and remember your every action not only as a nurse but as a woman.’ Florence Nightingale

When a young northern girl quietly dropped home economics in favour of the three sciences, against her parents’ wishes, little did she expect to rise through the ranks of the Queen Alexandra’s Royal Army Nursing Corps (the QAs), the nursing branch of the British Army, and follow in the footsteps of Florence Nightingale, to whom the QAs trace their heritage, healing injured soldiers far from home as well as educating and recruiting sisters back in Britain.

In this heartfelt memoir, spanning the 1950s and ’60s, Major Margaret Thomas ARRC recalls preparing operating theatre supplies for Suez, avoiding the wrath of the President of Ghana, working with Canadians in a military hospital in Germany, toiling day and night in Singapore with casualties flown in from Borneo, enjoying R&R in Penang and being presented to the Queen at Buckingham Palace. Through her reminisces we learn of the special relationship between the troops and the sisters – QAs being a combination of ‘mum’ and ‘sweetheart’ depending on the age of the soldier and the severity of his injuries. Margaret recalls happy, sad and sometimes hilarious incidents with service patients and she embodies all that Florence Nightingale hoped for in an army nurse: compassion, skill, discipline and an appetite for adventure.

Margaret Thomas rose through the ranks of the Queen Alexandra’s Royal Army Nursing Corps and held the rank of major. She was awarded the ARRC and presented to Queen Elizabeth II at Buckingham Palace in recognition of her service to military nursing.